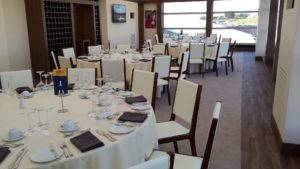 The attendance at The 146th Open surpassed the 230,000 mark set at Royal Liverpool in 2006, making it the largest-ever Championship held in England and reflected a 17% increase since The Open last visited Royal Birkdale in 2008. Record advance ticket sales made it the fastest-selling Championship in history and the fans were thrilled by a final day that resulted in Jordan Spieth lifting the coveted Claret Jug.

It wasn’t only the volume of people that tested the 26,000 sqm of on-course facilities provided by Arena Structures, the weather that added teeth to the links course from the players’ perspective ranged from gorgeous sunshine to torrential downpours with thunder and lightning and winds off the sea.

Huge demand for The Open’s official hospitality offering led to all six packages selling out, from our triple deck Patron’s Club which hosted the main brand partners to the Champions Club, running alongside bespoke HSBC and Mastercard structures and the impressive retail outlet housed in Arena’s flagship I-Novation temporary building.

At the other end of the installation Arena’s creative fit out teams transformed the temporary structures interiors into a variety of environments to suit the multiple requirements depending on usage and the brand occupying the space. Spaceworks and Well Dressed Tables,  supplied expansive ranges of event furniture.